City of Glass 27- (The Stillman Apartment/ the Space Between)


It has taken a while but the latest 'City of Glass'* painting has emerged with satisfying ambiguities.  There are even two titles, two ways in, even two possible solutions. (I removed the ziggurat shaped top section but it's worth another look now the painting has moved on).
The blue block is of course Central Park, 'the space between' West Side and East Side, but continuing the themes of the series and my interest in the play between the plan view of New York, the grid of the streets and frontal view, I have also made Central Park an entrance, a gateway to a space beyond.
During the process I had the figure of Stillman walking through the opening but the idea never worked. Colour replaced image, much more intriguing, the last of my Williamsburg paint -'Sevre Blue' and 'Courbet Green' - boosting the intensity of the block at the southern end of the Park.
The dividing line between the canvases is 69th St, highlighting the location of the Stillman apartment but the painting can also read as an interior, inside the apartment.  Referencing Matisse's 'French Window at Coulliere', the blue block is an opening, a view to outside, but the denseness and emptiness of the negative space dominate. The blue is both inside and outside. 8,7,6,5th Avenues below Central Park become a balcony. I love the uncertainty of the definition between vertical and horizontal planes. 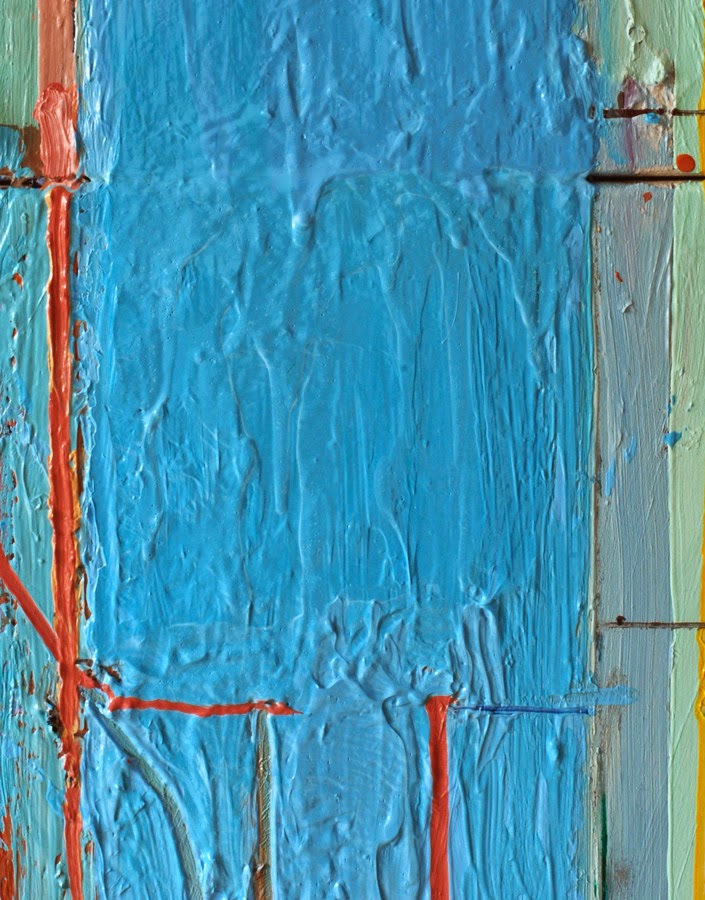 I am still coming to terms with this piece - it inhabits the space between abstraction and figuration but the blue is something else, something sensuous, seductive and undefinable.

In the alternative ending (VERSION 2), you lose the idea of being physically inside the apartment but the ziggurat- topped tower- shape is the apartment building on 69th St and links to the Tower of Babel in the story. With the severity of its' shape, the increase in greys and the abrupt ending of the blues at 110St, the tower-shape is oppressive resonating with the darkness in the novel and with the atmosphere inside the apartment when Quinn meets Peter and where of course the story ends. This version is more about image and object and claustrophobia, the other more about colour and the senses.

I love the idea of the two alternative endings/versions. It happens in literature, 'The French Lieutenants' Woman (and The Magus?), and in film, the two versions of Apocalypse Now!, why not in painting?
I may change the name of the first version to 'The Blue Space'

'What is not possible is not to choose'    Jean-Paul Sartre.


All the artists who have been on my 'Freedom in Painting' courses will recognise this quote, often nailed, Luther-like to the studio door.  However, with this piece, with the two versions, two solutions, I have decided not to choose because I believe they both work in their own, different way.   I find it exciting, that with one screw, I can make the severest of editing, and make a very different painting.
We have had the 'roof' on for a couple of days, now it's time to take it off and enjoy the interior of the apartment.

I have, however, been decisive with the title, it is now simply called The Stillman Apartment.

'The space between...' is the theme I set for the forthcoming Canterbury workshop and the words and concept have been constantly in my thoughts in this piece. The idea will drive the next paintings in the series. I was in St.Ives, Porthleven and Falmouth on a perfect day yesterday, enjoying the moment but painting in my head, ideas, colours, words, compositions. Smaller canvases next- I wish to make something as powerful as the blue in 'The Stillman Apartment'...the detail above gives a clue to the direction I will be taking..

This painting happened because I was in the studio day after day- it is the only way to work, to focus. I had a fascinating talk with curator Charlotte Davis at Falmouth Art Gallery yesterday. She organised and participated in a 24 drawing session. It is a bizarre concept but poses many questions; is it possible to focus for 24 hrs?  Because of the intensity of the session will the work go somewhere new?  I'm going to take part in the next one, work on a painting for 24hrs...catch a train home!


* from 'The New York Trilogy', a novel by Paul Auster