The reds are so dark and dense- I've been waiting for two days to see the painting in the daylight. The cross/post/vertical has gone back in, further to the left and not as stark. Also a little bit of drawing of a building - an incident in the bottom left corner, breaking up the reds. The building is the Old Lifeboat House, the studio where we hold the Porthleven workshops, and it's presence gives an opportunity to acknowledge the enormous influence of Matisse's 'The Red Studio' on my work and re-title the painting. Nice balance with the angled lines of the slipway in the top right, creating a diagonal movement across the painting. The final act was to strengthen the bottom line of the top-right of the four central piers, which had seemed a little bit lost. A long journey from the original drawing which I think works as it is- an exploration of the idea of angled lines. On to the next painting.

The last session I think. Neil Young's 'Southern Man' blasting out. Saturdays painting was just a little too graphic, a little too still, so I've gone in with more red and used directional lines in the paint to create movement. The final dilemma was whether to remove the post/cross at the bottom of the painting which seemed to be grabbing too much attention. Lets' do it - let the red dominate the drawing.
The line is now barely there, deliberately off-vertical, and doing a job for the painting, linking with those other discreet verticals.

A good day in the studio. Sorry to tease, it was too dark to photograph, I’ll post  a new image tomorrow.

My latest painting, ‘Porthleven 23’ made me look again at this piece last night.  I concluded that while ‘23’ was a painting, this was an illustration. I saw confusion: too many shapes, too many small areas, too many lines, too much painting to the line. Perhaps I was too deferential to the linear elements of the original drawing.  Above all, I saw lazy colour: is that the best blue against that red, the best green?- answer, no. I also realised that the red and blue/green areas were too evenly balanced - very dull - and that the sea, compared to the sea in ‘23’, was a cartoon, an illustration, the marks stopping you seeing the quality of the marks up the left-hand side. There is a point where information, drawings, photos, have to be put to one side and imagination allowed to take over. Paint is different stuff. I realised there was a stronger, purer painting to be found. I had no hesitation in taking the plunge to find it, do whatever it takes for the painting.

Dreaming about my painting- got up early to resolve a niggle and put in a tiny red, near horizontal-line to hold the sea-shape in place. It's on the right hand side near the top, bang in the center in the detail below. Not only are reds difficult to work this they are also difficult to photograph- they look garish on some screens, dull on mine. You have to see the real thing- I think these are pretty tasty reds! 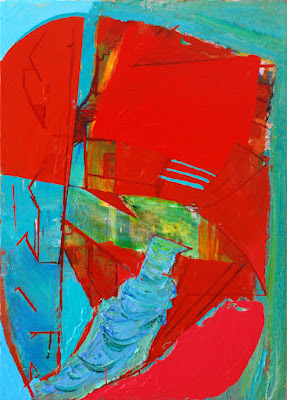 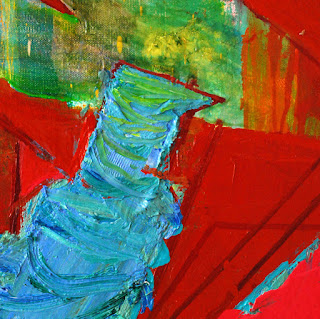 Apologies for confusing my friends on Facebook by putting out 2 versions of the painting yesterday!  I think this final version is stronger and more interesting spatially. Since turning the canvas round, I repainted the sea, reversing the direction of the waves and adding a warmer green at the top to make the transition into the center green basin less harsh. I much prefer how the harbour is held now by the pink curve, with the choppy sea leading the eye into the painting. I quite often turn my paintings round during the process - this painting started off in the landscape format- doing whatever it takes to make a stronger piece. The buildings you see on the left-side are in fact the buildings you would see 'in reality' at the back of the harbour at the top of the painting. But I feel they work better for the painting on the left- painting-truth.


So, after one or two false alarms, I’m finally happy with the painting - it has something else, something new, something different to the other paintings in the series. Maybe to tie in with the ‘Red’ workshop in Canterbury in December, I thought it was time to explore red again: Indian Red, Venetian Red, Cadmium, Alizarin, Light Red, Rose….

Red is difficult because it changes so much in different light; bright reds in the artificial light in the studio become, deep, dark reds in natural light.  I have to find the reds that work in both. And of course, the blues and greens look darker in the studio…

The start-point was a drawing I made recently in Porthleven from the fisherman’s quay, picking up the rhythms of angles and triangles of cranes and boats, the slipways and the buildings behind.  The painting followed the spirit of the drawing but I wasn’t happy with the big shape- like a loaf of bread- the too obvious blue sky and the static viewpoint. 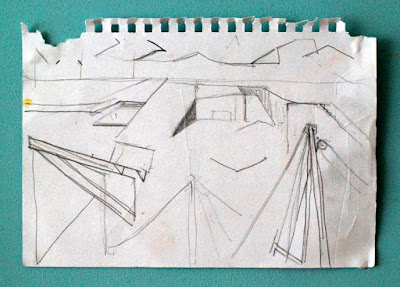 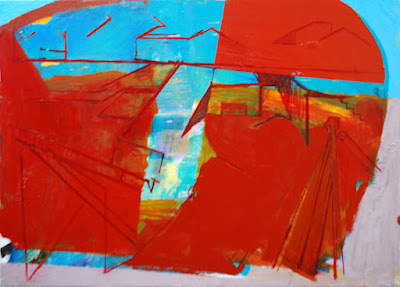 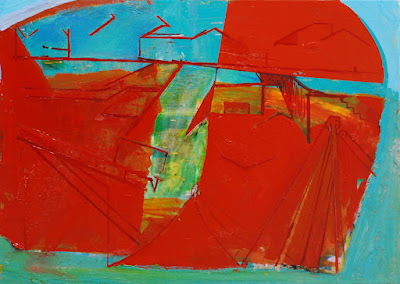 The painting began when I put the drawing away and turned the canvas: immediately the imagery was less obvious, the space more interesting. Now we are looking at the whole harbour, with its’ three distinctive kinds of water, separated/broken down by the two pairs of piers and jetty.

Forms, structures are hinted rather than illustrated, the marks and shapes and colours have their own interest. The viewer has to work!

Now I do like the large shape and how it sits within the rectangle of the canvas, and the strong and beautiful  's' - shape within. The painting is full of intriguing shapes, the pink curve, the sea barrelling in, the warm green still center, the curious curved triangle/structure/pier, pointing in from the right.  It is probably the most ‘Lanyonesque’ of my Porthleven paintings, with its’ twisting forms and multi viewpoints, but I am enjoying its’ colour, the cascade of red shapes and the journey around the painting, in and out and around.  It is Porthleven and it is a painting, and in my eyes has the elusive balance between freedom and control that I'm after.