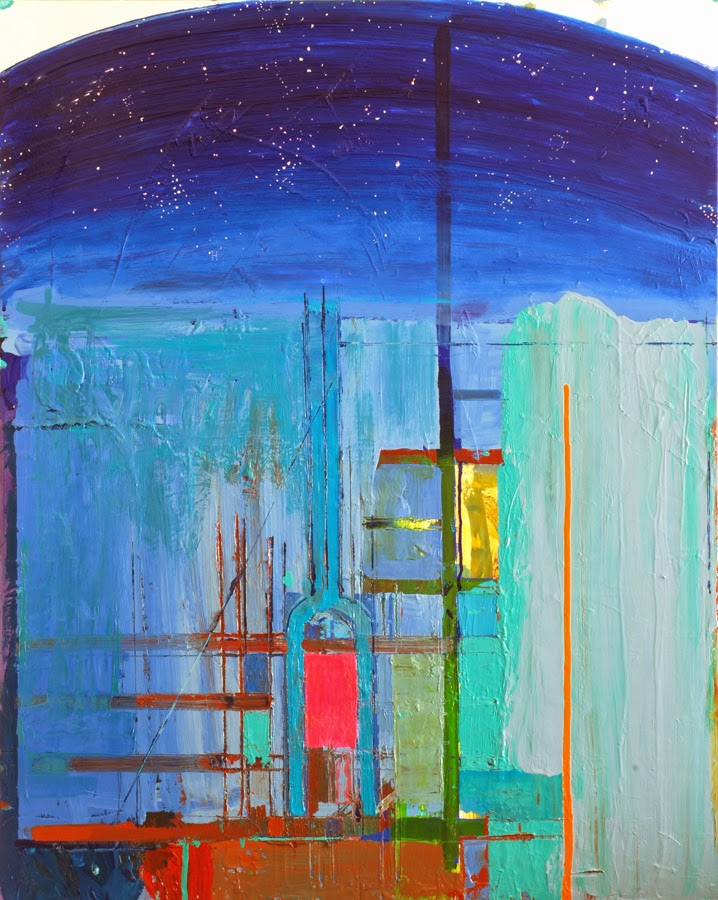 The stars went in, an Alizarin glaze on the pink block, a couple of additional lines, tried and discarded, and it was done. This magical moment, when the painting says STOP! is unexplainable, intuitive, based on knowledge only up to a certain point because this is a new thing. Ideas, process, probing, testing, melt into pleasure, the senses.
Familiar themes of the grids of architecture and the street interlocking, a building 'there but not there', now you see it , now you don't.  A rare sky, both inside and outside Grand Central station...fake sky, fake constellations, fact & fiction. The  curve of the sky is the new thing, echoed by curves within the painting. The stalagmite orange line pulsates, the proportion and arrangement of the rectangles feel right, glowing with colour, one with light. A window? I love the strength of the intersection of the long horizontal and vertical,(42nd St & Lexington Ave), almost making a painting within a painting but then not. The eye is led upwards. The familiar figure of Stillman from 'The New York Trilogy' * appeared at one point, two Stillmans, blue left, brown right: there are few traces, edited out, but they forced the issue and moved the painting forwards- this painting is about something else. 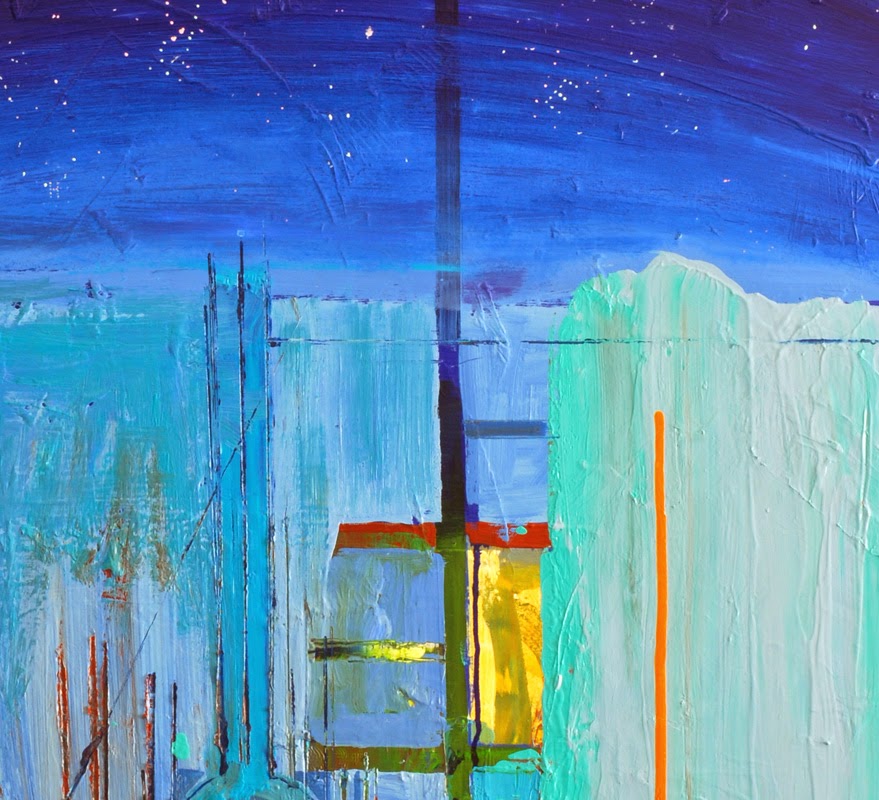 
Colour is happening and a more complex space. None of the usual colour horrors bringing it into the daylight. The dominant vertical that emerged - (Lexington Avenue) is on the Golden Section, as is the 'horizon' line. Over 30 years, I can't remember ever using these proportions deliberately/consciously, though I guess they have appeared. Together with the curve of the sky, the painting makes me think of ' The Baptism of Christ' by Piero della Francesca, with the weird hovering bird. Looking at the two paintings, there is also the strange co-incidence of the angled leg of the figure on the right and the diagonal in my painting- spooky, almost a reverse image.


The constellations/letters are going back in tomorrow and refinements adjustments of the verticals and horizontals. 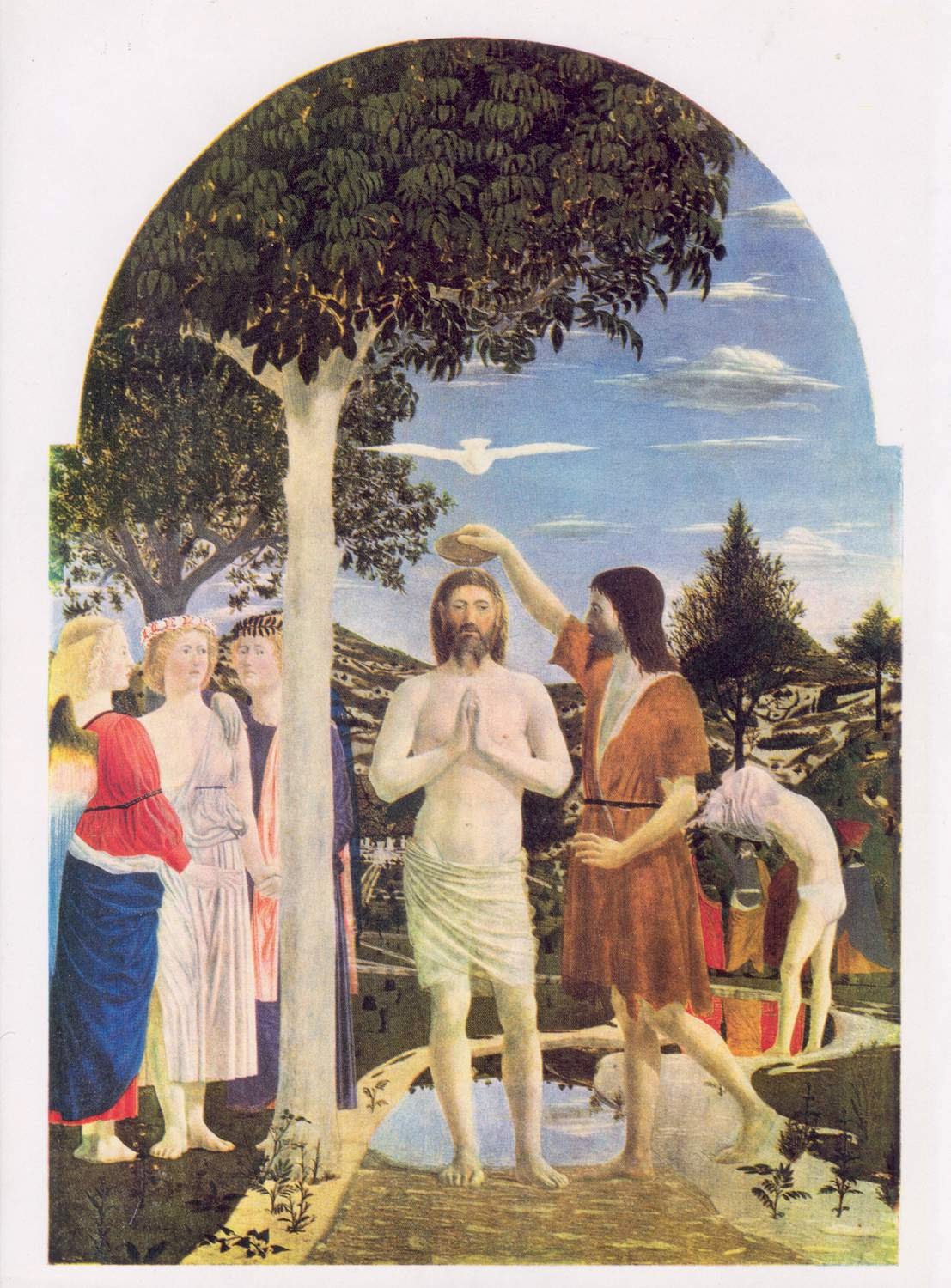 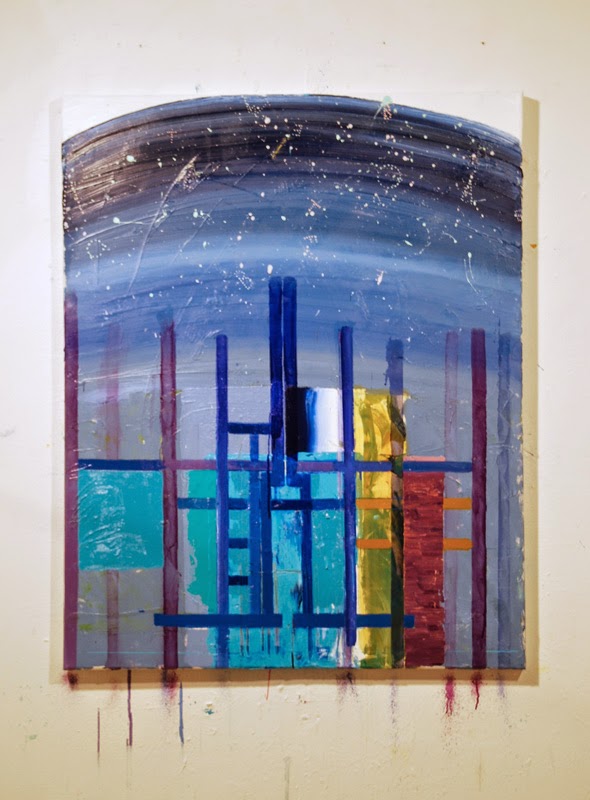 Early days...the sky will be the deepest blue, letters hidden among the constellations in the vaulted ceiling of Grand Central Station....ghost avenues.....the 'scaffolding' of the streets still raw.. the dual carriageway of Park Avenue pointing to the heavens, also the radio tower atop a half-hidden building...

* a novel by Paul Auster