'The Power of the Dog' - new painting

Breaking down some shapes/states below the border, strengthening others - purple Durango, bird-like Nuevo Leon and the new blue brushmark on the right now appear almost sculptural, sitting upright on the bottom edge. Tweaks of colour...two fast brushmarks, left to right, deflattening the image and bringing movement..The eye was being pulled downwards in the earlier version, now we are going across the image following the line of the border.

Denise's idea- a touch of the purple near the top, describing the edge of New Mexico.

The drill holes/bullet holes now continue around the 'frame' I have been considering a utilitarian grey for the 'frame' but then it may become unambiguously a frame and not part of the painting. The 'functional' holes from the screws that held the perspex now become part of the painting. Looking back on my notes, I originally intended to drill holes along the border, showing the twin border towns. The holes around the painting are physical/real/actual, symbolic and decorative, darkness and light...

This is not a political painting, it's art from another piece of art, a novel, that reconnects me to a landscape I last visited eighteen years ago. There was going to be much more red, but it is what it is, a seduction by colour and paint. The edge in this painting is what is revealed as you approach it, the collected residues of the process on the bottom ledge.

Beauty and the beast....perhaps this is the link to the message of the novel - the pus below the surface of respectability... 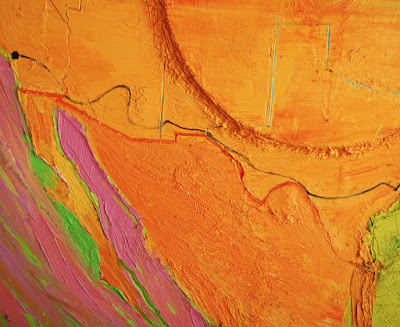 I've painted this border before - above is a detail from 'Sunset Ltd', the name of the trainline that hugs the border on it's journey from LA to New Orleans. In comparison, the new piece looks almost flamboyant. 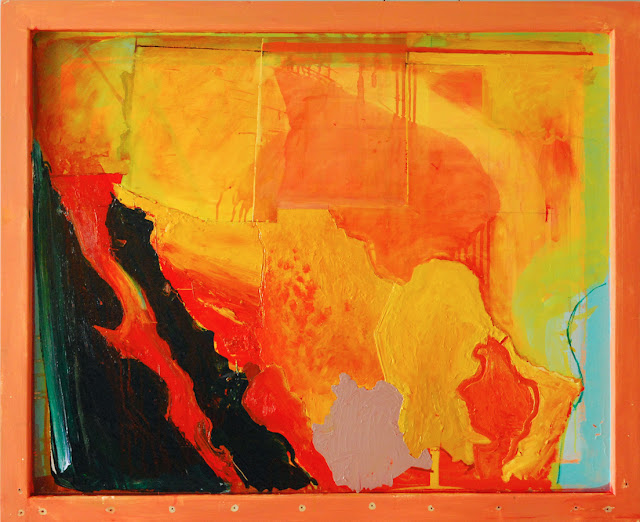 Late night session...the jigsaw states are back, lots of borders, edges, shapes to play with. Maybe it's become too literal and 'tasteful'? I much prefer the subtleties of the paint and colour and the openness of the borders on the US side. Or is it good to have the contrast, highlighting the difference between man-made and natural borders?

The excitement in the painting comes in the bottom shelf where ideas and actions are collected. Stronger (accidental) compositions too.  Pools of congealed red in the gutter. 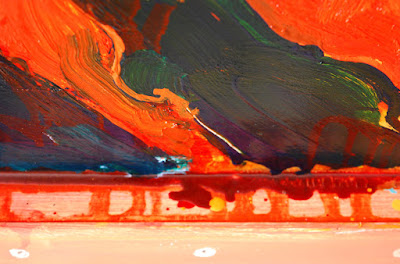 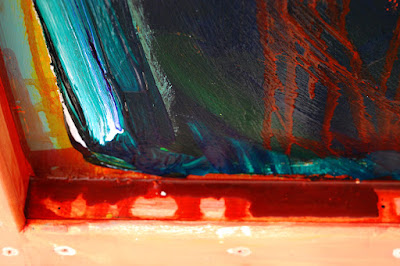 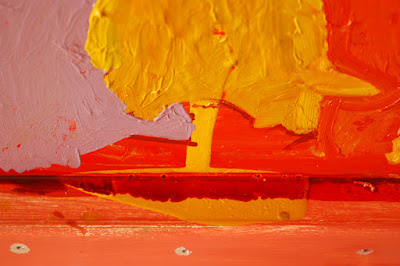 So is the piece about that surprise, that contrast between image and process that is revealed as you approach the painting?

I'm going to extend the drill holes all around the painting to break up the flatness of the frame (bullets?- again too literal) The frame may be gray.  The jigsaw shapes sit too smugly- I'm missing the dynamism of the angled brushmarks in the version below. Time to re-look the image. 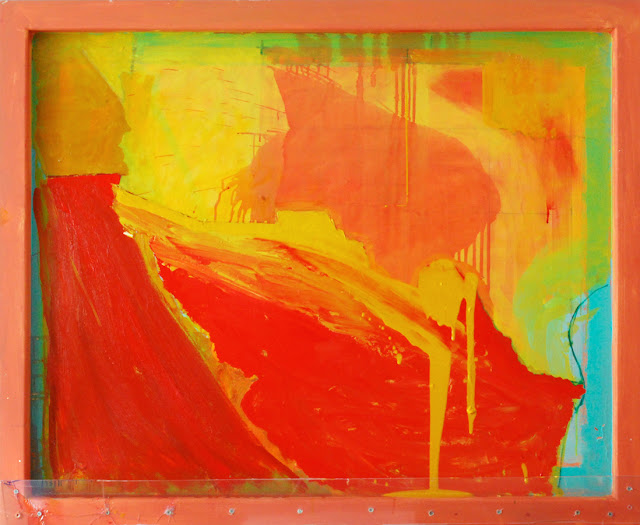 The painting opening up...borders broken down...the.jigsaw states of Mexico submerged , for now....residues collecting.... I've put a temporary piece of perspex at the bottom to collect the paint... 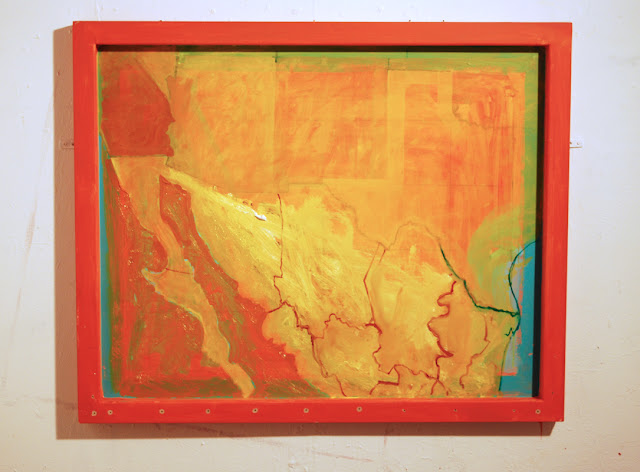 The start of a new painting (series), once again working from a novel, 'The Power of the Dog' by Don Winslow, about narco-wars in Mexico and the American Southwest.  It's also my response to the theme of 'Borders', the theme of the inaugural Newlyn Society of Artists exhibition in January at their new home at Tremenheere.

I'm working on a customized frame, with the idea that the bottom recess/shelf will capture the residues of my process and be an integral part of the painting.

Early days, mainly acrylic underpainting, but I have plans....It's good to be back in the game. 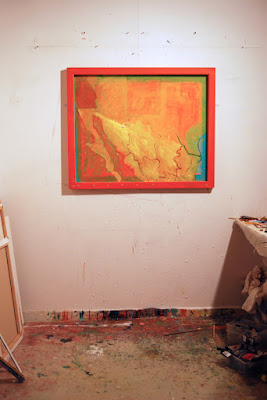 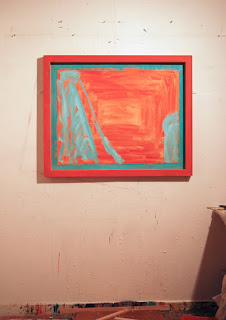 Email ThisBlogThis!Share to TwitterShare to FacebookShare to Pinterest
Labels: Don Winslow, The Power of the Dog