Babel rises….built brick by brick.  A new Babel in New York. In the spirit of the novel, each brick/canvas contains one of the letters that spell THETOWEROFBABEL, hidden in the real or imagined grid of New York, ‘fact’ and ‘fiction’ once again intermingled.  As I have mentioned before, what is exciting about this piece is the flexibility offered by the rearrangement of the bricks. Perhaps the new Babel will look more like the arrangement below, from this years Open Studios....

This painted tower was always intended as the centerpiece of the series, the finale, the idea was always lurking in the background. However, after a break of a few months there are new ideas and memories of half-explored ideas, unresolved. The ‘City of Glass’ series goes on…. 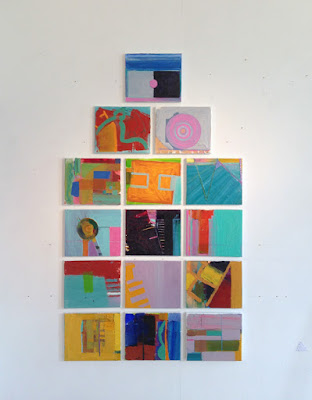 For greater clarity, I have given this piece different number 41, with each individual brick/canvas/letter numbered in sequence 42-56

A very short session in the studio- one thought, one tool, one colour, one action, one line....the Tower is complete.  Looking forward to a day off with the family.

The extension of the line works for me, fading out towards the edge....I have really enjoyed making this piece- not least because it has forced me to work in the landscape format and on smaller canvases (25x30cms), where changes can be made very rapidly. While enjoying looking at the Tower, the downside is that each individual brick/letter/canvas is undervalued and hard to see. I think some of the paintings are as good as anything I have done, especially the later canvases so I am going to give each a City of Glass number to recognize their quality. It might take away a bit of the fun of working out the letters but perhaps they are obvious anyway....

Reflection: I'm seeing the painting in a different light- it's the New York canyon thing,...fiery sun... it's aerial view and image and a letter and the final brick..Now for the final arrangement...

A long session in the studio, the Tower is one mark away from completion. The horizontal needs to extend further across the painting, almost to the right edge. It was there but the falling paint took it away.  A necessary subtle, subtle line to counteract all those verticals, a cut or the edge of a blade... 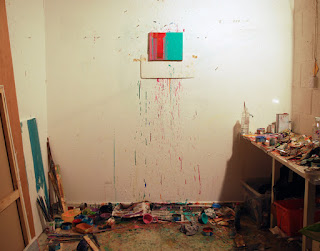 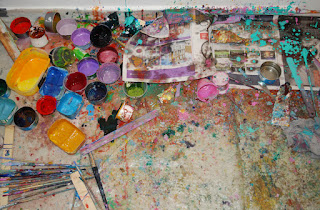 A looser, more flamboyant painting, I usually have Manhattan on the vertical, but this time I've using the natural 60 degree angle. It's undeniable - I must have been thinking about the terrific Mali Morris painting on Paul Behnke's recent post in Structure and Imagery. Thanks to you both!

Having a look again: leaving the gap between the 2 angled lines of the grid is critical, keeping it open, an entrance to the painting. It's done.

When you look into the nothing what do you see?

I am just enjoying this painting as sensation, colour, peace, that beautiful central divide when i went back in with the colour. In terms of context, the painting is based on a 'real' district of New York, but there is the ambiguity to enjoy of what is water, what is land....

I was seeing these colours in my sleep - in the studio at 5 this morning. Magenta+ Emerald Green + a bit of Hookers Green + White has made 'Lush Lilac' and an orangey Indian Yellow/Cadmium yellow mix. The single line de-flattens the space and offers an escape... two bricks/letters to go...

Went to Charlestown today, to escape from my cave. The Tower was still in my thoughts-  I was looking at mortar between the bricks of the harbour walls!. Love the reduction and the colour and the purity and the emptiness in this latest painting.

Q: When is a square not a square?   A: When it is a double-square

The excitement builds getting towards the completion of the Tower, hopefully by the end of the week.

'The building of the Tower became the obsessive , overriding passion of mankind, more important finally than life itself. Bricks became more precious than people. Women labourers did not even stop to give birth to their children; they secured the newborn in their aprons and went right on working' (P: 44, 'The New York Trilogy)     Quite!

Denise suggested the colour- scheme for the new 'brick' - pink and pale grey. Might tidy up the bottom and have the circle truly balanced on the line. The circle feels as if it might roll off to the right but maybe that brings a tension to the piece. Imperfect circles are best - Trevor Bell is the master.

'Brick 10' has been a battle - I've just spent five hours in the studio trying stuff out, looking for a stronger, purer painting. I was bugged by being able to see the stretcher behind the paint on the left in (2) and needed to know whether the point of the triangle should touch the bottom of the canvas. I think (2) and the final painting work in different ways but I believe I've made a better painting. (2) is more decorative, busier, but the painting above has a strength in the drawing and the more intriguing space. I particularly like how the purple triangle sits on the line and its relationship with the pale-yellow corner.  The softer edges too against the severity of the scored lines. It's an uncompromising piece.

The scored line was technically difficult- drawn by hand in one go with no room for error and because of the thickness of the paint, there is was a build up of excess paint around the sides which had to removed afterwards with a knife.  A pure freeing mark- if it went wrong I would have to remake a flat surface again, losing the unique combination of colours and marks underneath.

Underneath? Where exactly is the line? The not knowing makes the painting interesting.

The composition and the key elements have remained from the first session (1) The angled paint is critical as it mirrors the angled streets of the district. The purple triangle is a specific detail that cuts the horizontal of the street and of course the 'W' is one of the letters in THETOWEROFBABEL. Within these parameters I've made a painting.

I hope my daughter Faye likes it- she was upset when I started to make changes.  I like how the painting is, I think I can leave it. Like the building of the original Tower of Babel, this piece has become all obsessive - five 'bricks' to go. I have the locations for the remaining letters- lets see what happens.

Possibly a new 'brick', maybe make the scratched angled line more precise. Found a new colour, Faye said it was one of those colours you can't name but she has come up with Kinda Cornish as it is a real sea-colour. Triangles (and letters) everywhere in this part of New York.

I couldn't wait- I took off the blue paint with a knife allowing the underneath greens to come through. A vertical mark instead of a block of colour. I still need to straighten the edge. I've also taken out the scratched triangle at the bottom to allow the deep,deep violet to flood through the right side. A little bit of crisp drawing at the top of the column brings clarity and a suggestion of architecture....

A good session- I've been  looking forward to introducing a dark 'brick' into the tower to shake things up. Might put a dark blue glaze over the column on the right to push it back into the painting at the same time simplifying the composition. Got to wait a few days 'til it's dry. I also want to straighten the edge- it was straight but the paint slid off! 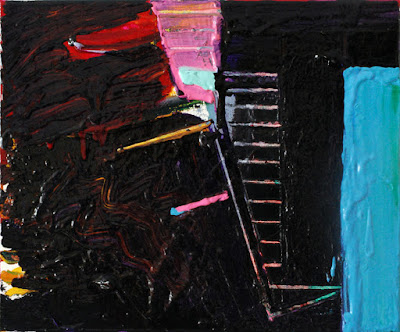 I like all three versions but particularly the whimsical feel of the final painting - the spinning wheel of the strange contraption held by the dark line. Just. Denise and Peggy (from Modern Artists Gallery) see a face...Although upright, it is also a 'real' location in New York...

Version 1 is very graphic but I felt the letter was too centered and too obvious. I do like the mysterious dark space though. Version 2 was nearly a contender- very sculptural, very still, pure and austere, but with too much downward movement.


The version below was too static, the letter too blatant. The purple line, above, weighted at the bottom, the tiny-angled purple line, and some vertical brushstrokes have transformed this painting - it's much more complex and intriguing. 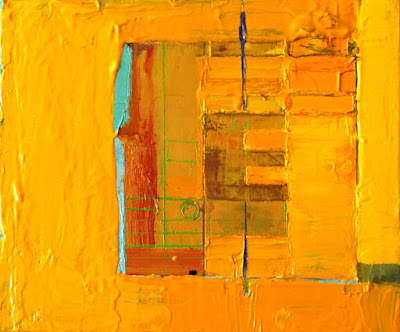 
In the recent City of Glass paintings, the Tower of Babel, the central image from the novel*, has been neglected....In this piece, each small painting, 25x35cms,  becomes a brick in the Tower. In the spirit of the novel, each 'brick' will contain one of the fifteen letters that spell THETOWEROFBABEL, some obvious, some more obscure.

Further exploring the blurrings of 'fact' and 'fiction' in the novel and in the series, some of the 'bricks' are based on the street-grid of Manhattan, others are pure invention - they could be part of the grid. It is for the viewer to become detective to make these discoveries....

Manhattan is dismantled, fragmented, rearranged. There is a discipline: if one of the paintings/bricks happens to sell, I am obliged to replace it, find another way to paint the missing letter.

In this way the piece is renewed, kept fresh. I am looking forward to arranging the finished 'bricks'. Because of the infinite number of combinations, the piece need never appear the same twice. The 'new' Babel in New York may not be necessarily ziggurat-shaped....

This piece is for Geoff Rigden, who sadly passed away recently. Geoff taught me at Canterbury and set me on the road to becoming a painter, He often came to my Open Studios in London, and was very generous and perceptive in his comments about my work, opening my eyes to the possibilities in painting. Although, you don't normally associate 'image' with Geoff's painting, I hope that each individual panel contains something of the serious playfulness of his work.

The 'bricks' below may change, though I hope by not too much.

*'The New York Trilogy', a novel by Paul Auster